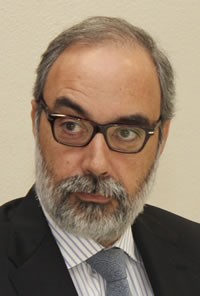 Dr. Vasconcelos got his PhD in . He has a very successful life in the Academia side. He has contributed greatly to his Fields, by conducting researches and publications; and by guiding students in the path to achieve further educations. He shares the mission of the University and he is determined to do his share, in order to attain, all of the Goals.

Jorge Vasconcelos is currently a research scientist at the Institute for Security Information of the Johns Hopkins University, working in the fields of Embedded Computing Security and Computing Fundamentals Education, particularly developing undergraduate educational projects for computer architecture and mentoring students implementing IS&A applications in microcontrollers.

He is also an Academic Advisor in Atlantic International University, AIU, and a member of the Academic Council.

He received his B.Sc. in Computer Engineering (with honors) from the Arturo Rosenblueth Foundation, in Mexico City in 1996, and his M.S.E. and Ph.D. in Computer Science from the Johns Hopkins University (May 2000 and 2008, respectively.)

His doctoral research focused in four aspects of Computer Science Education: (i) application of the constructivist paradigm to programming instruction, (ii) creation of instruments for early detection of cognitive abilities required in algorithmic problem solving, (iii) study of individual differences to promote differentiated instruction within the computer science classroom, and (iv) design of curricular models focused in problem solving and algorithmic thinking. In the future, he intends to incorporate computer architecture, hardware control, cryptography, and information security, into his research on computer education.

Jorge has taught introductory computer science for almost two decades, and published five high school textbooks for the Mexican market. While at Johns Hopkins, he has served as instructor for Summer Programs (CTY and CS department), developed the courses Algorithmic Thinking and Embedded Systems Fundamentals, and has been co-instructor of Computer Security Architectures. He has also been research assistant in Physics and Astronomy for Universum, Mexico City's science center, and IT consultant for the Office of International Students (JHU) and the Law Office of Nava-Garces (Mexico).

He received doctoral scholarships from the Fulbright Program, Encyclopedia Britannica and CONACyT (Mexican Council for Science and Technology.) He won the George M. L. Sommerman Award for teaching assistant (JHU) and an honorific mention during the Sixth Graduate Research Symposium at the College of William and Mary. He is member of the New York Academy of Sciences, the IEEE and the ACM.

Master of Science and Engineering in Computer Science.

Diploma on Popularization of Science

Summer instructor of Introduction to Programming in C/C++.

Editorial assistant for the guide “Living in Baltimore”, published by the GRO of Hopkins. May 2002.

Seven papers published in proceedings of Mexican conferences on Computing and Informatics. 1991-1996.

Twenty one articles published in the students´ magazine "Visión Universitaria" (Most of them about historical aspects of the University of Mexico.)  National High School, México1988 -1999

Nomination for the award Leading Educators of the World 2005, by the International Biographical Centre (Cambridge, England), February 2005.

George M.L. Sommerman Engineering Graduate Teaching Assistant Award for outstanding performance as a teaching assistant within the School of Engineering, JHU, May 5, 2003.

Fellowships to realize graduate studies within the Johns Hopkins University:

Winner in the contest "Making a book of History of the Science" with a essay about computer's history.  The contest was sponsored by the Mexican Academy of Sciences, the Presidency's Council for Sciences and the National Council for Science and Technology. México 1996.